ERH interrupts the badly belated celebration of Mothers & More to post this piece on the intersection of our humanity and our immense grief over the brutal attack in Orlando. All of us can light a candle, and work to diffuse the nature of violent behavior and reduce the access to weapons of mass murder in our society. Minds can turn, and churn out hate and brutality. We cannot stop every awful act. But as adult grown-ups, as responsible human beings, we cannot fall prey to fallacies around the topic of gun violence in this country. Neither the prevalence of law-abiding gun owners, nor the fact that we cannot stop every action is a reason for inaction. That is like saying we should never act to protect anyone from bad products, falling rocks, storms, or other calamities. As responsible adults, we must come together over calamity and reason out a way to reduce access, seek protection from those we should be cautious of, and support a culture of safety and care. The end, read on. {EHR} 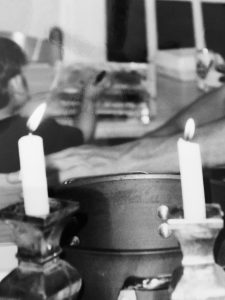 “We are not here to curse the darkness, but to light a candle that can guide us through the darkness to a safe and sure future. For the world is changing. The old era is ending. The old ways will not do.” John F. Kennedy upon accepting the Democratic Party’s Nomination

I was moved to tears yesterday while visiting the 6th Floor Museum in Dallas. I live here, and have only been there one other time – two, if you count the day my father drove us by and pointed out the infamous window when I was 10 or 11.
What moved me so? Is it that this is another election season, also filled with great division, perhaps a race as tight as the one in 1960 when John Fitzgerald Kennedy ran against Richard M. Nixon for the White House? Is it the tragedy of a father taken too soon, the look of utter helplessness, defenselessness in the motorcade images? The images of J.F. K. the father, of Camelot?

Or, the knowledge I have that Jackie never wanted to make the trip to Dallas…or, the folks I know who were waiting for him at the Trade Mart, or who had just met him over in Fort Worth. Is it the “repeat repeat” once again – the idea of one dangerous man to enlarge his own importance out of some wild imagining, ideology or bitterness, to murder — to possibly do great harm to the nation?

How many really know that Jack Kennedy was beloved, but also reviled? Blamed for every bad thing. Words of hatred and red baiting, fear of communism and over-reaching government greeted the entourage in the newspaper the day he arrived, even.

Acrimony was high, so high.

There is a message book to write down thoughts and reflections upon leaving the 6th floor. After we found my cell phone because I lost track of it because I got so caught up –  I wrote this: “Since I was a little girl, I heard stories about that awful day from siblings, parents and grandparents. As an adult, friends have told me where they were in Dallas that day, sharing their horror and sadness. May the memory of JFK be a blessing, and may extremism and hatred fade away.”

I remember being in NYC at a piano bar in the Village, or hanging out with my gorgeous and larger than life sister- in – law at a bar in Maryland, realizing we were in a gay bar in the early ‘90s. Who cared? We danced anyway. My friendships and family ties with the LGBT community go way, way back to a time when so many I love were discovering who they were, where they belonged. My fear for their safety in our society is always with me. I never missed the opportunity to join with them, to gather with my friends who were members of those communities. We celebrated life together. Our lives intersect.

Ripping across lines of language, nationality, belief, love, sexual orientation and human rights, is this hatred, this extremism, this hatred, this towering and invisible battle between old and new, between modernity and rigidity in an era where all lines intersect, and all of us are touched when one of us is harmed.

To curse the darkness will not sew up what’s been ripped, or mend broken hearts. We can be the candle that leads into the future.

I was struck hard, awed, really, by this mass card that accompanied the funeral service for JFK. It was an exhortation to hold the candle high, to keep aloft the values shared by so many, to act in this world to end infamy, to do battle for justice. And, of course, displayed in pictures from the funeral, openly, was this aching, personal longing and grief writ large on a national and international scale, as now.

Never before has the choice been so stark. We all must come together where our grief, broken hearts and rage intersect to seek peace, to draw up our courage to make the world safe and sane.

Blessings to you all where you live and work, where you intersect with family and friends. Be strong, be strong, let us comfort and strengthen one another in our day to day life. More so, though, let’s care by getting involved. Many, many candles can generate the light we need.